To say I’m obsessed with the cars I’ve owned, would be an under-statement! To date it's 19... Click to count 'em HERE. 😍
I certainly remember my first car - who doesn't?! - the year was 1973 and mine was a clapped-out J-reg (1970) 848cc mini-van, and I loved it! The sad thing is, that I don’t have any photos, but maybe that’s a good thing...read on! Yes, it was a VAN, and I had this idea to remove the side panels and replace them with glass to make it more 'estate like'. Total cost of the van? Just 30 quid, total cost of the glass, 25 quid - a bargain!. I didn’t get a choice with the colour of the van (it was navy blue) so my Dad suggested we repaint it. And he did mean repaint it. Not a spray-gun to be seen, but being good at interior decorating, he had a cunning plan - and I was very nervous!! 😮
Two weekends later it was 'job done!' And although it ended up being a very satisfying maroon-colour, it had brush marks so thick, you could plant vegetables in the furrows. My street-cred was in tatters, but at least I learned at a very early age, how to make people laugh (or, more accurately, my van did! 🥴) It was no speedster either with 0-60 in around 30 minutes and a top speed of just 72mph! 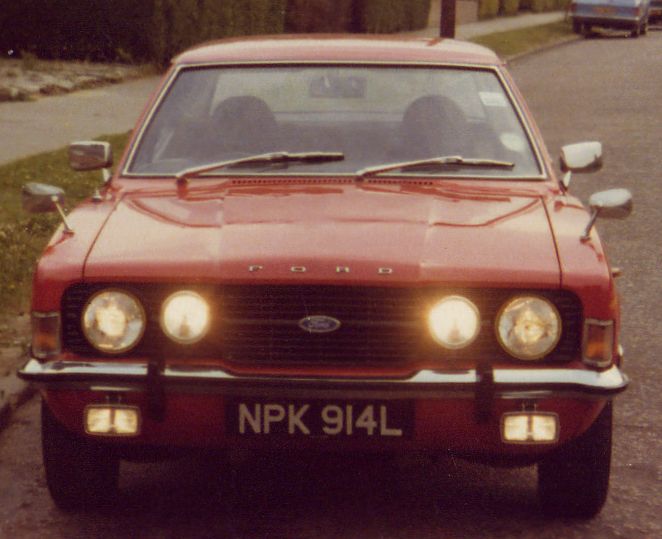 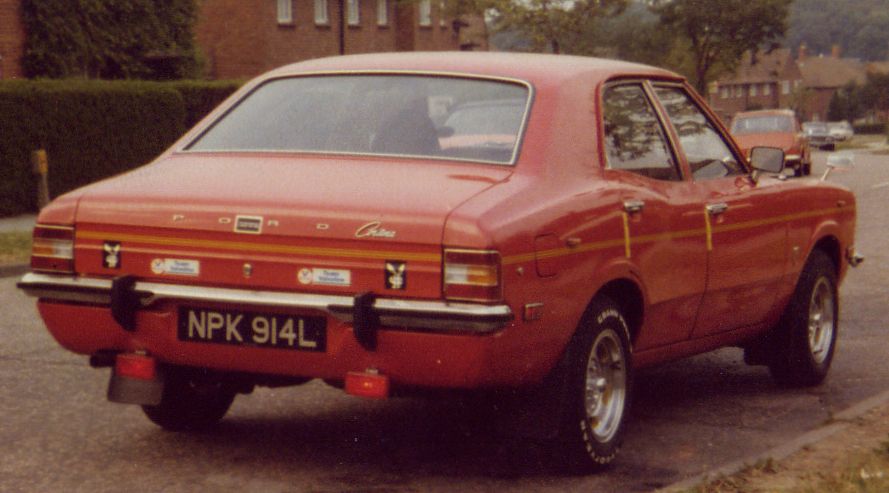 Luckily, two years later, my next car was a bright red 1.6L Ford Cortina MkIII. Just a few photos survive - and it looked cool! (Well, I thought so!) with its Wolfrace wheels, white lettered tyres and the obligatory Bunny Club stickers on the boot! 😎
Since that first Ford, I became a bit of a Cortina fan! Next was was a purple 2000e and then a yellow, two-litre 'Cortina 80'. From 1981, my proper job offered me a series of company cars (unfortunately with limited marques and colours!). My first: a horrible grey-coloured Ford Escort followed, 73,800 miles later, by another Ford Escort, this time in a much more satisfying dark blue. I then defected from Fords for my next (and final) company-car and chose a white 1.6 Vauxhall Astra.
When I left the 9-to-5 on 3rd March 1989 to become self-employed, I chose my car based on value-for-money. So that meant a dabble with Japanese marques (much to Dad's disgust!). My first was a black 1.8 litre Nissan Bluebird (with electric windows!) and then, two years later, another black Bluebird with a slightly larger engine - and this one now had a sun-roof too! Next, I gave Nissan a break and tried out Hondas. Two Preludes followed in the early/mid 90s, one silver, then one in a deep maroon red. Starting with the Preludes, I treated myself to a dateless number plate - 901 ASV - and it's been on all my cars ever since. My next car was a true 'animal' - a black Toyota Supra Twin Turbo. It was the fastest car I ever owned (0-60 in under 5 seconds was pretty impressive for the 90s!) and its acceleration scared the the life out of me, most of my passengers and the occasional pedestrian too! 300+ BHP of pure power, that was totally impractical, a nightmare in the wet, and eye-wateringly expensive to insure. I loved it!! 😍

A few years later, in a slightly more mature moment, I rose to the dizzy heights of owning a Lexus. It was a posh car and gave my customers the impression that the business was doing well (it was!). But, in a strange twist of fate, I returned to an older Ford 2.5 litre Mondeo, when the business took a dive a couple of years later 😫. Twelve months on, I was back on my feet and bought the then recently launched 2.7 litre diesel Jaguar 's'-type in silver.

The Jaguar did me proud and it got me interested in the company's history. I then returned to my first love, two years down the line, of a top-of-the-range new-shape (and brand new) Ford Mondeo 'Titanium' in midnight black. On the 2nd April 2011, I replaced it and took delivery of a new Vauxhall Insignia - a car so full of tech, even I needed to read the handbook 😁. It was very sad to let it go when I closed the business and retired in January 2013. 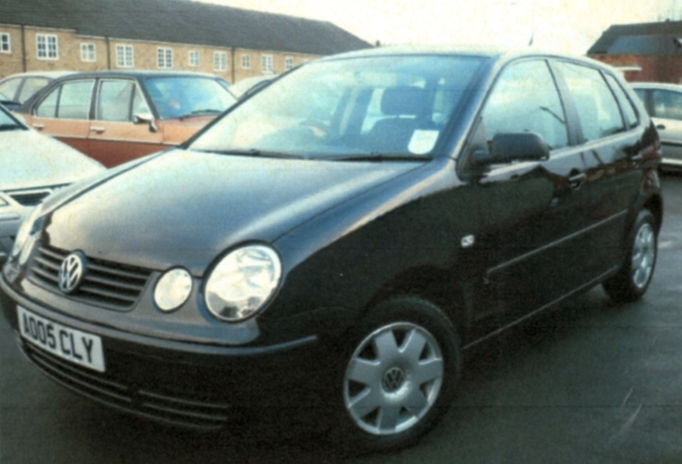 Then, just when I thought I wouldn’t have (or need) a car for a while, on March 1, 2014, our good friend Lee, gave me her VW Polo, because she was giving up driving. It was a solid workhorse and reminded me so much of my Mini! - small, noisy, but it did the job.

Then, on Wednesday, July 2 2014, I abandoned all sense of reasoning and bought a gorgeous, gas-guzzling, 2009 Jaguar XKR in Spectrum Blue, with just 30,340 on the clock. If the Supra's 300+ bhp was scary, this beauty pushed-out just over 500 horses!! Wow! What a ride! 😜
From possibly one of the slowest cars on the planet to one of the fastest, took me almost 50 years, but I think it was worth the wait!! 😍. On Thursday, November 25th, 2021, I took advantage of the temporary increase in the value of used-cars - and sold it! It was an opportunity that I felt was ubnlikely to repeat itself. The XKR went from being worth around 14k, 18 months ago, to a whisper under 20k. It was a bittersweet day, but it felt like the right thing to do! 🙄. What a car the XKR was... I hope the next owner falls in love with it, as much as I did!!! 😍. Surprise, surprise! On Thursday 9th December, 2021, the XKR first appeared for sale in AutoTrader HERE, and then a few days later the same advert appeared on eBay for £26,995. 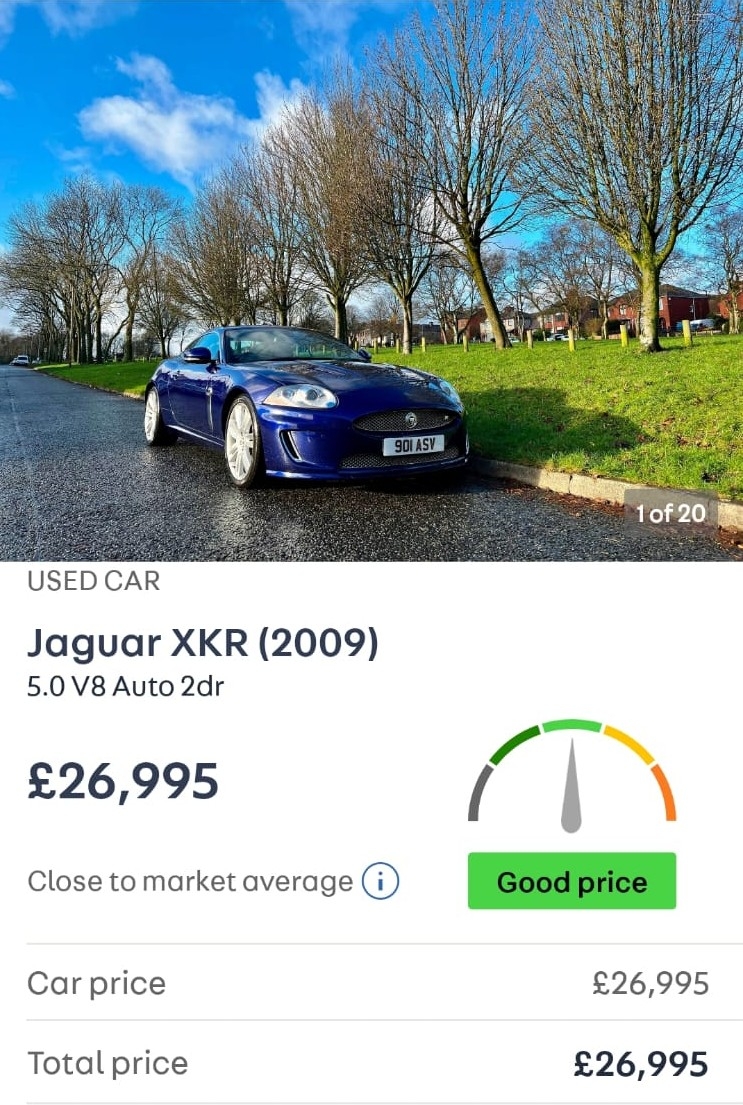